20 mins after leaving my stopover I noticed a strange noise coming from the van.

When you’ve owned a vehicle for long enough you know the difference between the weird sounds that go with it and ones you’ve not heard before, they usually indicate something is wrong, sure enough, there was…

I first tried to repair the puncture using some tyre weld but then realised there was a gaping hole in the wall at the rear so the next option was to change the wheel, one slight issue that I’ve never sorted out, no jack.

Luckily I had the sense to take out some breakdown cover prior to leaving, the cheapest I could get it for was 100 quid for a years UK breakdown cover that includes 6 weeks euro cover from Just Kampers, well worth it. I called the breakdown number and in no time at all the nice lady on the phone told me there would be a breakdown truck with me in about 30 minutes, while I waited for the truck I got the spare wheel out from under the van. 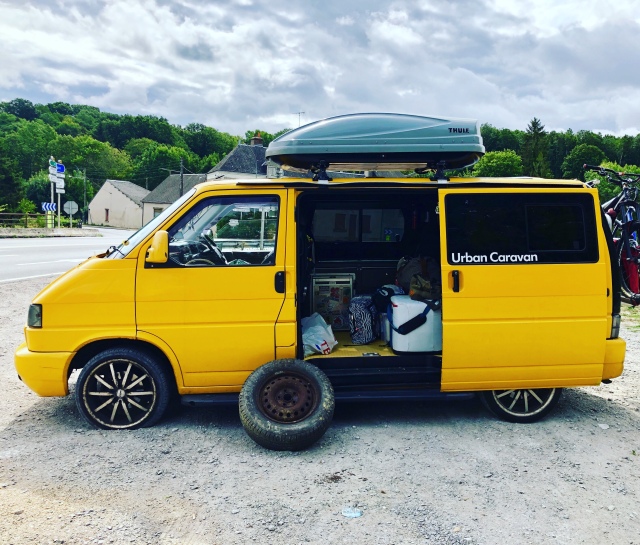 I’m pretty sure this is the original spare wheel, it’s never been used, it’s also been strapped to the bottom of the van for nearly 20 years so it’s a bit rusty, still serviceable however, in 30 minutes the truck arrived. 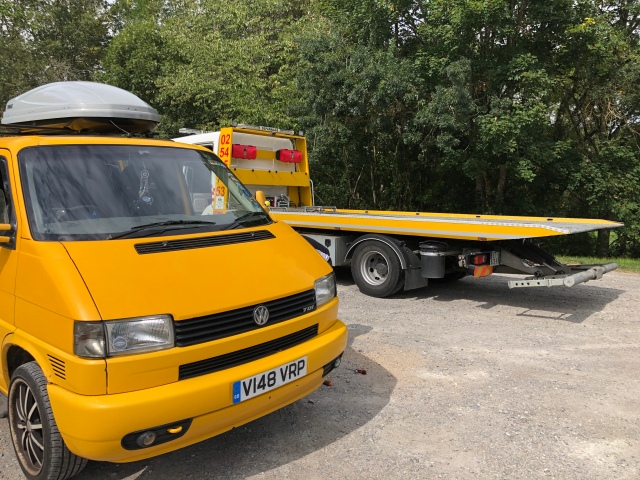 In no time at all the wheel was changed, I noticed the spare looked a bit flat and I couldn’t get the dust cap off so I asked the recovery dude to borrow some pliers, he brought some and had a go at removing the dust cap but as he did he must have dislodged the valve momentarily and some air came out, I’m pretty sure what he said in French was leave it alone and get as far as you can…

I drove for about 20k and wasn’t convinced the tyre would make the 180k journey in it’s current condition so I stopped off, bought a couple of pairs of pliers, got the dust cap off and topped up the tyre to the correct pressure, I then did another couple of stops every 20k or so to check the tyre wasn’t losing any air, all good and happy to sit at about 80mph without any vibrations through the steering wheel.

Lindi and Ian live in a place called Le Tourondel and it turns out there are 2 of them 50 mins drive apart, guess who has now visited both of them…

Many cold beers were drunk and Lolly’s mum made a lovely roast which went down a treat, it’s very relaxing in Le Tourondel, it’s also dead quiet and it’s lovely to sit out the front and listen to all the wildlife. There are bats roosting in one of the buildings and right outside the house is a commune light, the light attracts insects and the insects attract the bats, you could watch them for hours….

The next day was a pretty laid back affair, Lindi and Ian had things to do in the garden ahead of Ians birthday, Lauren managed to lie in the sun for nearly 10 whole minutes without Stella putting sand on her, I made some lunch for everyone and took an aerial shot of the place..

The house with the nice grey roof is the main house, the building with the rusty roof is the barn, the building next to Bumblebee is the bat hotel and the building up at the top by the motor home is the little house which Ian has recently restored. The garden is being remodelled hence the lack of vegetation, next time we’re here I’ll take another shot to see how things have progressed.

Ian and I ventured down in to town to get the tyre fixed to find the tyre shop closed till the end of August. Ian called one of his friends who organised a new tyre for us to be fitted the following day in a town called Tulle. Lolly had organised a trip to some epic caves, Gouffre De Padirac. 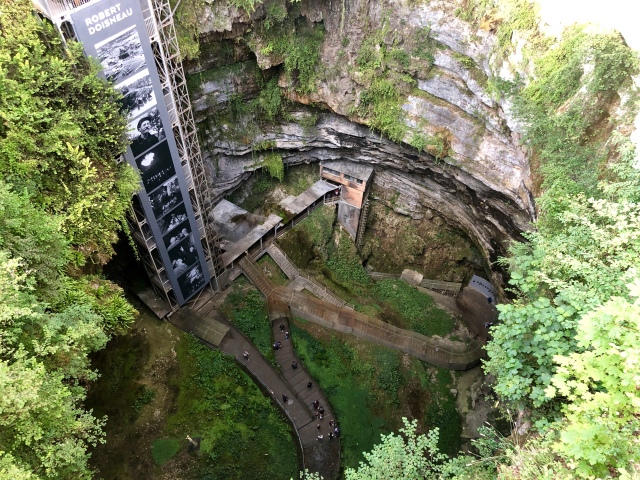 Looking down the entrance is impressive… 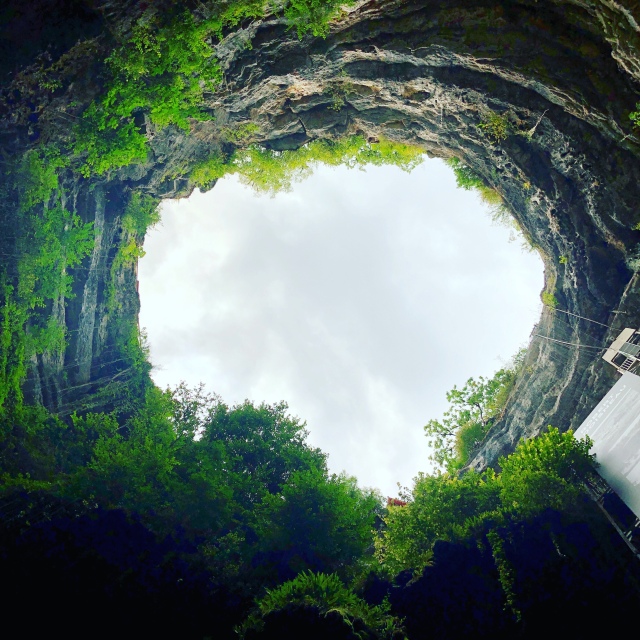 Looking up is even more impressive…

I’ve always fascinated by underground spaces, be it tunnels, bunkers or caves and these ones are incredible, they are massive, it’s mad to think all of this has been carved out by water over millions of years. 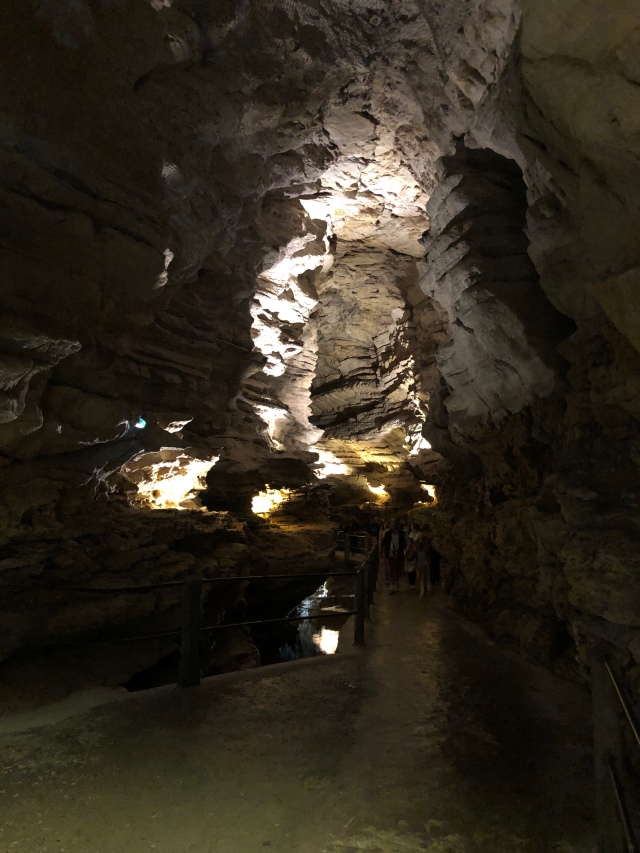 There are numerous lakes in the caves which have been lit up beautifully.

Part of the tour takes you on a small boat along the underground river which is awesome although you aren’t allowed to take any pictures or video while on the boat.

You are given audio guides that tell you loads of interesting facts, the thing that blew me away is when the caves were discovered it was in the 1800’s, two blokes went down that entrance on a rope ladder with some candles, got as far as the river, went back up and got a canoe so they could go further. They can’t possibly have seen as much as we could until electricity came to the caves some time later.

To work out how high the halls were they got a kind of chines lantern with some string on it and sent it up to the roof, then measured the string, genius!

This picture above gives you an idea of how big the caves are, you can see people walking up the steps and this was halfway up one of the halls.

It does get cold down there so I’d recommend talking a jumper, it’s a great trip to do on a wet and rainy day, we spent two hours in the caves.

The next day was get the tyre sorted day.

Unfortunately Simon hadn’t told me which tyre shop in Tulle he had made the appointment with so there was considerable cocking about while I tried to get hold of him to confirm. Turns out he thought he had sent me the address but the message didn’t send. Once I got to the shop it was to close to lunch time to get the tyre sorted so they told me to come back at 2PM after lunch.

In France, nothing gets in the way of lunch, for two hours everyone downs tools, shuts up shop and has lunch. There is also a rule that you must change either both front tyres or both rear tyres, Simon explained I only needed the one, the garage agreed but said they could not fit the wheel to the vehicle, I would have to do that myself, no worries.

We did some shopping at Noz and Decathlon, I chipped off to get the wheel and the Coups headed to Lidl to grab shopping.

Tomorrow is Ian’s 65th birthday so there is a little bit of a party going on in Le Tourondel, I can’t wait…