Every arch came with a free set of rust, in fact pretty much the whole bottom quarter of the van needed some sort of attention.

Not the best picture but you can kind of see some of the rust along the bottom sill, there was rust everywhere and a few knocks too..

the van was dispatched to Paul who is a fine car painter and also my friend Danny’s dad, a good deal was struck!

Each arch had to be sanded back, filled and in some cases rust cut out and metal put back in.

Then sanded, shaped and primed.

After a lot of work, ready to paint.

The photos above are of just one arch, all four need attenion along with the lower sill on each side and a few dents here and there as shown below. 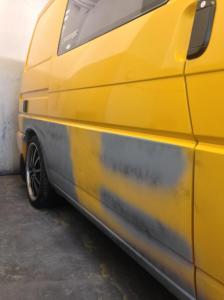 The end result was pretty awesome, below is what Bumblebee looks like now, rust free for a good few years and sparkling from bonnet to boot.