Our trip to France started with a 21st birthday party in Hertfordshire and camping in a bloke called Bob’s back garden. He has a lovely house in a little village called Furneux Pelham and had offered to host Billies 21st. Billie is Lauren’s cousin. When we arrived there was a good sprinkling of family chatting away and some of Billies guests in the pool, they’re quite a sensible lot, if someone had let me borrow their house and pool for a 21st birthday it would have been proper carnage!

As the evening progressed the only people that seemed to get smashed was us oldies, either the 21 year old massive didn’t drink or they held it down well, I was probably too smashed to notice.

Bob’s garden is massive as demonstrated by the small band of travellers that stayed the night in their wagons taking up no room at all.

Our alarm went off at 05.00, nothing like getting up at stupid o’clock to go on holiday, we made a brew and then lolly went for a dip. 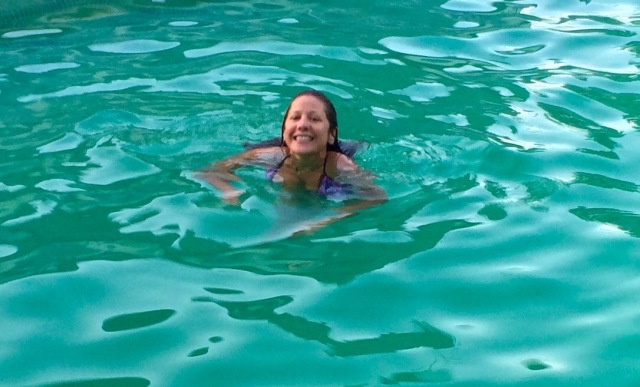 We had a chat with Lollys mum and dad who are also travelling to France, made a fairly loose arrangement with them and then headed off for the ferry.

The roads were deserted apart from the odd tool driving in the middle lane forever, rather that then traffic.

In no time at all we could see the sea which meant Dover wasn’t too far away.

The crossing was relatively uneventful tho I did buy a new Bluetooth speaker, haven’t tested it yet but am sure it will sound way better than the one I have at the moment which is average at best and a blatant rip off of something that should be way more expensive.

We left Calais and made straight for a little village called Chemin du cal serin, it’s about 2 or so hours drive heading in the direction of Marseilles. We’re stopping in this village as a couple we met last year recommend the Aire, for 5 euros a night you get water, electricity, WC and a nice view of an old castle.

When we arrived all the spots were taken so in true Mark Ashley / Croydonia style we made our own space.

We hadn’t eaten since we arrived in Dover so we set about getting some food cooking, chicken on the trusty Cobb and Lolly knocked up a lovely salad, rice and coleslaw.

After cooking the chicken the Cobb was still roasting hot so we cooked up all our sausages before they went off and chucked a couple of corns on and left them to cook while we went for a wander up to Coucy-le-chateau-auffrique.

What’s surprising about this place is there is a whole little village built around the ruin and there is a community of friendly goats roaming about the place too, they are really friendly if you have food.

Much to Lollys dismay we’d arrived just as the local boot fair was packing up so no wandering about looking at people’s stuff they’re trying to get rid of, we did however have a good look about the town and unfortunately just missed the tour of the castle. After about 30 minutes we came across the track we’d come so decided to head back down to the van, do all the washing up from earlier, have a little wander and then crash for the night.

We took a walk down a lane not far from the van which will be forever remembered as mosquito alley, bastard things everywhere, I’d already been bitten once and now have a temporarily inflated foot. I’ve been bitten a few more times since that walk, we retreated to van and watched the final two episodes of Wayward Pines, ate a considerable amount of chocolate and then went to bed.

All in all a successful first day, no fuel issues either which is a bonus, the only downside to living like this is not much in the way of showers, we do have a camping shower but I’d set that up a bit late so it hadn’t heated up very much by the time we got back to use it.

The combination of solar panels and split charge system is keeping the battery charged and fridge powered up which means our food keeps and if I ever get any beers they will be cold.

We’re off to the mountains tomorrow, I’ve always wanted to see a ski resort in summer so that’s what we’re doing, with any luck we’ll have a shower too!