About an hour and a half after leaving Brive we arrived in Sanquinet, our home for the next couple of nights was an aire by the lake, there were a number of free bays / pitches but we decided on one that we probably weren’t allowed to park on. 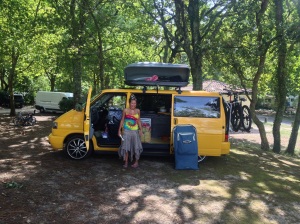 We parked up here because the view was really nice.

As Lolly had rightly predicted, we weren’t allowed to park where we were, the lady who comes round to collect your 9 euros for the night made it quite clear in French it was not possible to stay there and we would have to move, annoyingly i’d put up all the blinds to keep the sun out and pretty much covered the front seats with all our stuff, I chucked it all in the back of the van and reluctantly headed back to where we should have parked.

What you can see in front of us is actually a lake, not the sea although it’s a sandy beach beside it, we spent the remainder of the day hanging in the sun, I read Lolly the final chapter of the Martian and we ventured out to find food. A few wrong turns later and we found the intermarche, beer, salad and few other bits and bobs were purchased, on the way back we grabbed a roast chicken from a rotissere store and munched our way through the sunset.

There was no shower facilities at this aire so I made one, many people got to see my bum..

The problem with being next to a lake is mossies, they are everywhere, thankfully Lolly had packed mossie defences such as spray, smoke coils and a battery operated mossie defence thing, they all worked admirably, no bites.

Next day we ventured out on a canoe around the lake, we were gone for a couple of hours, saw some cows on an island and more tethered plastic birds than i’ve ever seen in any one place at any one time, we think it’s a bird watchers ploy to attract real birds as there were also what looked like bird watching hides..

Canoeing is knackering so after a couple of hours we retreated to the beach. We had a little walk about and found a suitable spot to eat our lunch and watch the world (paddle boards and catamarans) go by, we decided to come back for sunset.

More chicken and salad was on the agenda, i’d since moved the van to a better spot and on returning to it found an older but similarly coloured version of a camper van parked close by. 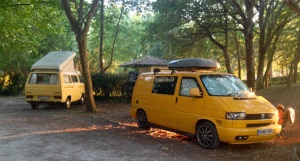 We watched the sunset from the spot we found at lunch, it was peaceful and quite spectacular.

I haven’t taken a selfie of us for a while so here’s one!

Not long after this we returned to the van and crashed, early start in the morning, we’re on the way home, via montalivet, less than a week and i’ll be back at work, boo….

If you have a T4 camper and like us, a sink with a waste water pipe that goes straight out the bottom of the van and dumps your water wherever you are parked you might want to try this simple and affordable waste water catcher solution. 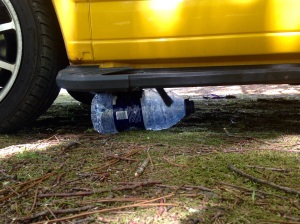 Works like a charm, get a knife and cut a cross near the top of the neck of the bottle, that way you can pretty much fill it up without spilling any, seen a lot of europeans with T4’s doing this…