In my 9 – 5 IT nerd role, our team support a number of external offices in the EMEA region, we do this remotley but at least once a year we travel to an office and help with any outstanding issues they might have. Over the years I’ve been to some amazing places, Moscow, Dubai, Madrid, Paris, I think the only office in region I have left to visit is Jo’Burg.

We try to rotate where we go so at some point all of the team will have visited all of the offices, this time I chose Istanbul. I’ve never been to Turkey and so many people in the office rave about Istanbul so I jumped at the chance to go, especially at works expense!

The office have put me up in a very nice hotel, the Four Seasons at the Bosphorus, it sits right on the river in the european half of of Turkey. If you head outside to the terrace you can see the Asia side of Turkey across the river.

I’d naively expected the weather to be scorchio but it turns out Istanbul isn’t blazing hot all the time, it’s wasn’t proper cold tho, you could head out in a hoodie and be warm enough.

I arrived early evening after an early start, I wasn’t up for too much so I headed to the terrace with my camera to grab some nights shots, thats when I saw the massive bridge or as the rest of the world knows it, the Bosphorous bridge which connects Europe to Asia by road.

You can kind of see it in the distance, it looks further than it is, I wanted to take a look and maybe grab a photo so I took a wander.

It took about 20 minutes walking before I reached more or less where the bridge is, there are a bunch of restaurants by the water and a square, in the surrounding streets are small stalls that sell clothing, jewellery and tourist stuff like fridge magnets. There is also a nice little Mosque that sits in the shadow of the bridge, I took a few photo’s but wasn’t really happy with them so they got tinned. I stuck around for about an hour and then headed back to the hotel.

Tuesday morning I headed to our office, it was nice to meet the people I speak to on the phone and as I have found with all the offices I have visited, I was made to feel very welcome. The plan was to spend a day at the office and then meet up with a colleague from the London office who is over here for a conference and do a bit of sight seeing in the evening. We had planned to head to Sultanahmet square to see the Blue Mosque, grab some food and soak up the Turkish atmosphere, maybe even entertain a carpet seller.

Unfortunately we never got there, first, when I met up with my colleague it was properly chucking it down monsoon style and wasn’t showing any signs of letting up, everything I wanted to visit was also closed. Added to this, earlier in the day a suicide bomber detonated a bomb in a park right by the mosque killing a number of tourists, we had both agreed we’d still go despite the bombing  but with the awful  weather and learning the square was on lockdown making it difficult to get to we decided to give it a swerve and had a couple of beers in the bar instead, dry January got put on hold for the evening.

Before I left for Istanbul a few of my colleagues had suggested I visit a place called the Basilica Cistern as they know I like things underground, architecture and history. It’s located not far from where the bomb went off, I figured it was unlikely there would be a second bombing the following day as security in the area would be tight so I worked through my lunch, left work an hour early and made my way to the square on a tram.

For anyone wishing to visit the Cistern ( or Yerebatan Cistern as it’s also known) with a camera and tripod they won’t let you take the tripod with you which makes long exposures a bit tricky, in the end I improvised and propped my camera on the floor so I could get a shot of the many columns which turned out alright, there are 336 columns in total! 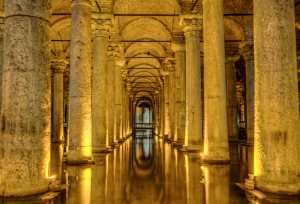 The cistern is an incredible place, there are huge carp that swim in the water and as you walk round water is constantly dripping giving you the impression you are wandering about a sewer system without the smell! It’s an incredible feeling to be walking around a construction that was built in the Roman era, very much like walking around Bath. At the base of 2 columns there are 2 medusa heads. 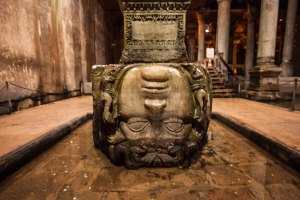 And one on it’s side… 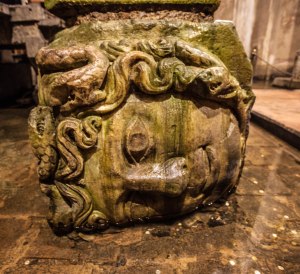 The general accepted thinking is that these Medusas were recycled from older buildings built before the cistern and were placed this way so the column on top is the same height as all the others!

I’m so glad my colleagues told me about the cistern, well worth a visit. I wandered around there for about an hour and then headed up to the square to take some shots of the blue mosque.

This is the Blue Mosque, it looks a lot more Blue during the day. 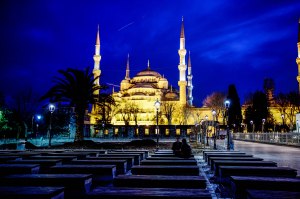 If you turn 180 degrees behind you is the Hagia Sophia 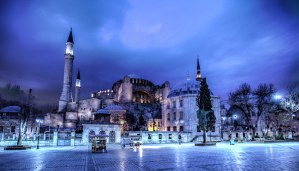 Annoyingly by the time I reached the square I missed the last entrance to the Hagia Sophia, from what I have heard it’s spectacular inside. The whole area was very quiet which I suspect was due to the previous days events, there were a few people that looked like tourists scuffing about but I am sure that before the bombing it would have been much busier.

My last stop of the night would be a restaurant called Banyan. One of the staff at the hotel had seen me taking pictures and asked if i’d seen the bridge and the mosque, I explained i’d been down there and taken a few shots but been disappointed with the results, Banyan is where you need to go she said, head to the terrace bar and you’ll get a great shot of the mosque and bridge, she was right..

I had a couple of drinks while I was taking photo’s and then headed back to the hotel, it was kebab night and I really wanted to try an authentic Turkish doner kebab and see if it was anything like the ones we have back in the UK after a nights boozing. It was more or less the same except there was no chilli sauce or mound of salad and it came in a wrap instead of a pitta.

All that remains of the trip is a half day of work and a plane ride home.

It’s been a great place to wander about and i’ve not felt uneasy or wary of any of the places I visited, not like Cairo where i feared for my life daily. It’s also been really nice that the cab drivers don’t try and rip you off though with the traffic i’d recommend public transport where possible, the trams reminded me of the ones back home in Croydonia.

Another thing that I found cool is the call to prayer, if you close your eyes and just listen you could be fooled into thinking you’re in a scorching sand pit middle east country with buildings made out of clay and people riding about on horses with massive swords, then you open your eyes and your somewhere really quite modern.

Hopefully i’ll get to come back one day, maybe for a long weekend with Lolly as there is so much more to see, failing that i’ll do my best to engineer an office visit in the summer !!!