Camping municipal Verdalle has turned out to be ok, the pitch is massive, the toilet and shower facilities are excellent, they have some strange rules like no hanging out washing after 10am and don’t use the trees to make washing lines which we’ve duly ignored. 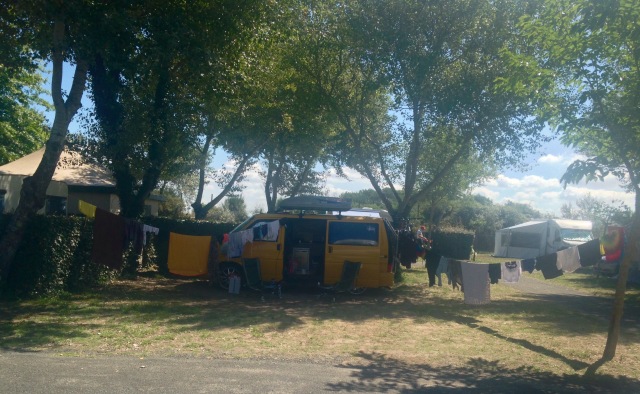 The beach was another IMO average affair, sandy and the sea was out so quite muddy too, when we returned in the evening the tide had come in and the beach looked a lot better, would have been a great place for a sunset but we missed that as I was busy cooking chicken, I didn’t bother taking a picture of the beach.

Earlier in the day we’d taken a walk and round the corner from our campsite and average beach was a lovely little harbour. 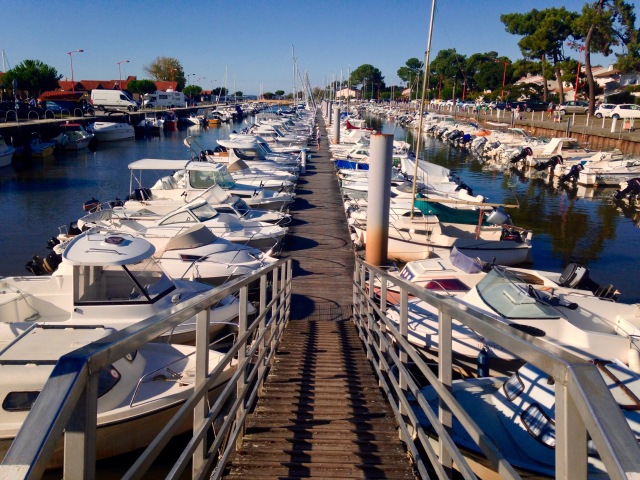 As you can see the weather has greatly improved, our first afternoon / evening in Gujan-Mestras passed fairly uneventfully, sun, average beach, walk, chicken and bed.

The following morning we got up, ate what we had left that would pass for breakfast and jumped on the bikes, our destination being The Grand Dune of Pyla, basically a massive sand dune by the sea that’s slowly swallowing a forest.

We got a bit lost en route although we did find a nice forest to ride through. 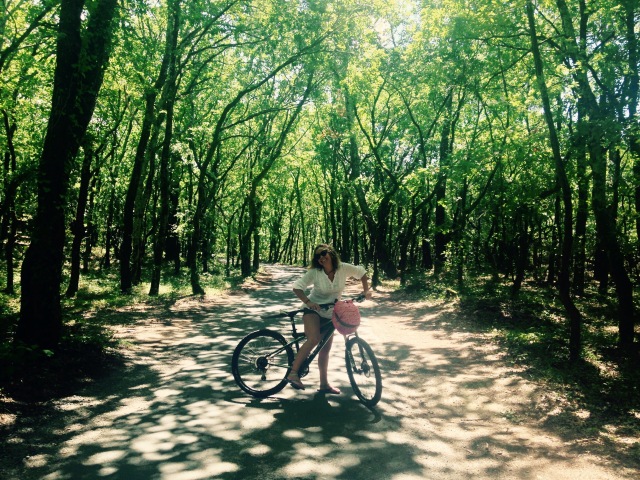 11 miles later we arrived at the dune and it was mental, people everywhere, not quite what we had expected and to be honest, almost enough to turn us on our heels, I convinced Lolly some food and a drink would be a good idea, she was more up for grabbing a panini and buggering off but I insisted we grab a table, this is where I had my first favourite French dish, a croque Monsieur! 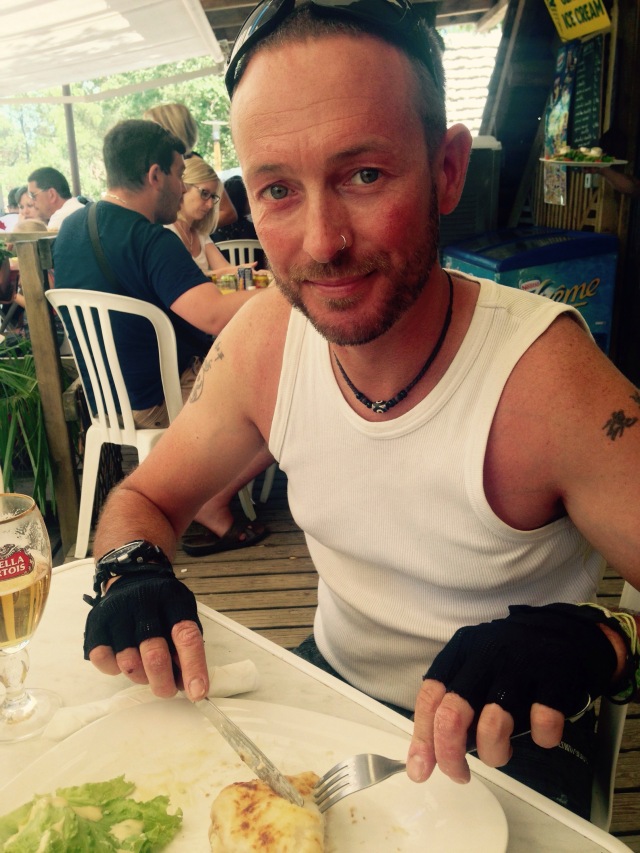 It was lovely and lolly is now convinced she can make them for me at home, bonus!

After a quick food and drink break we set off to conquer the dune, this is not something to try if you are unfit, obese, have a heart condition or are generally unwell. It’s a steep ascent in sand which is harder work than it looks, much harder, there are steps you can go up but they are equally as steep but with better footing.  It took us about 10 minutes to get to the top of the dune and that was with a couple of stops, the view out across the bay is stunning. 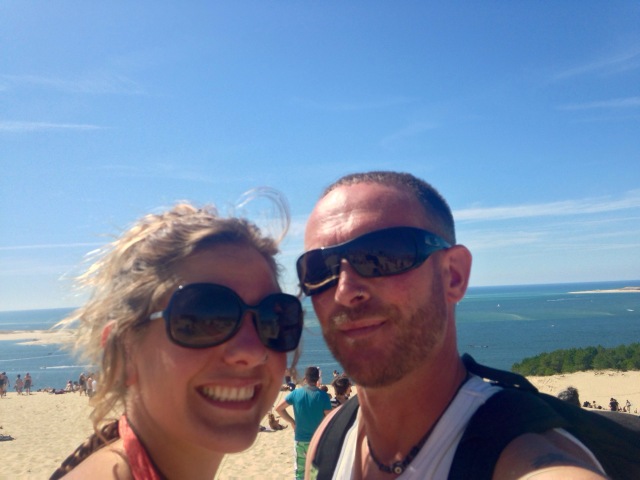 I took some better pictures with my other camera and when I’ve edited them I’ll post them up.

It’s nowhere near as frantic at the top of dune, almost peaceful so we hung about for an hour catching some rays and then headed down the other side to the beach and the sea, we stayed there for a few hours and I read Lolly some of the book I am reading, it’s called the Martian, a great read and now Lolly is into it I’m going to have to read her the rest of the book while we are away!

To get back to the bikes we had to climb up the dune again which took about 20 min this time as our start point was lower than before, after a lot of effort we reached the summit, chipped down the other side and made our way to the bikes, we still had an 11 mile ride home to do!

We took a different route home basically following the coast on a cycle path, about halfway we stopped at a little town square that had a few bars and restaurants, we got a corner table right by the beach. 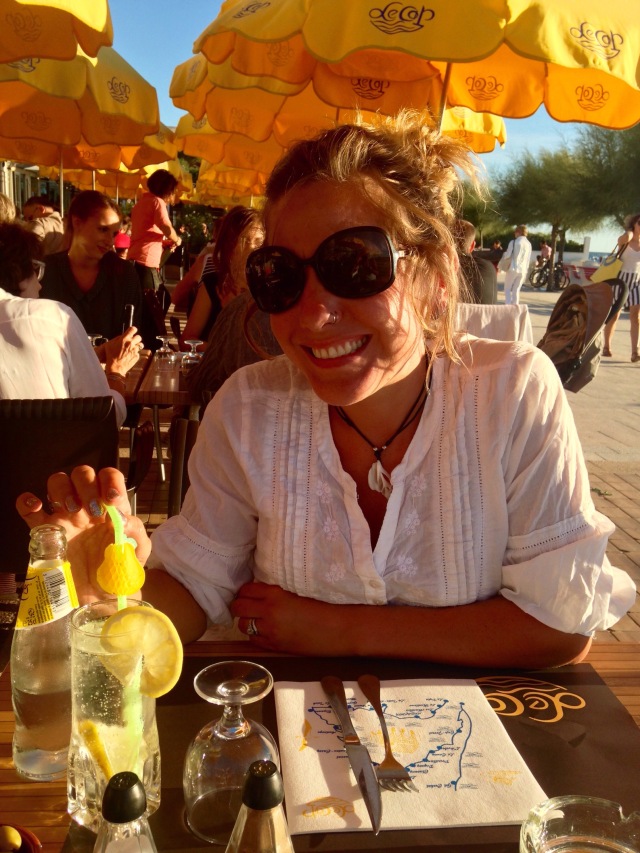 I had steak and lolly had paella, both dishes were lovely and we were treated to a beautiful sunset. 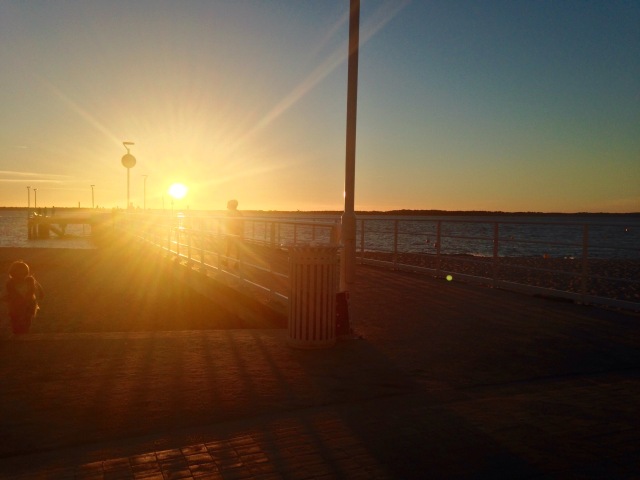 We made our way home mostly on the cycle path, the light faded and Lolly had no lights on her bike, mine are rechargeable and about halfway home the front one ran out of juice, the ride home was tense but we made it without getting killed!

Below is the report from Strava, I kept stopping Strava so I could see where we were on the way home so it’s not quite as accurate as it could be, I’m fairly certain we did more than 17 miles. 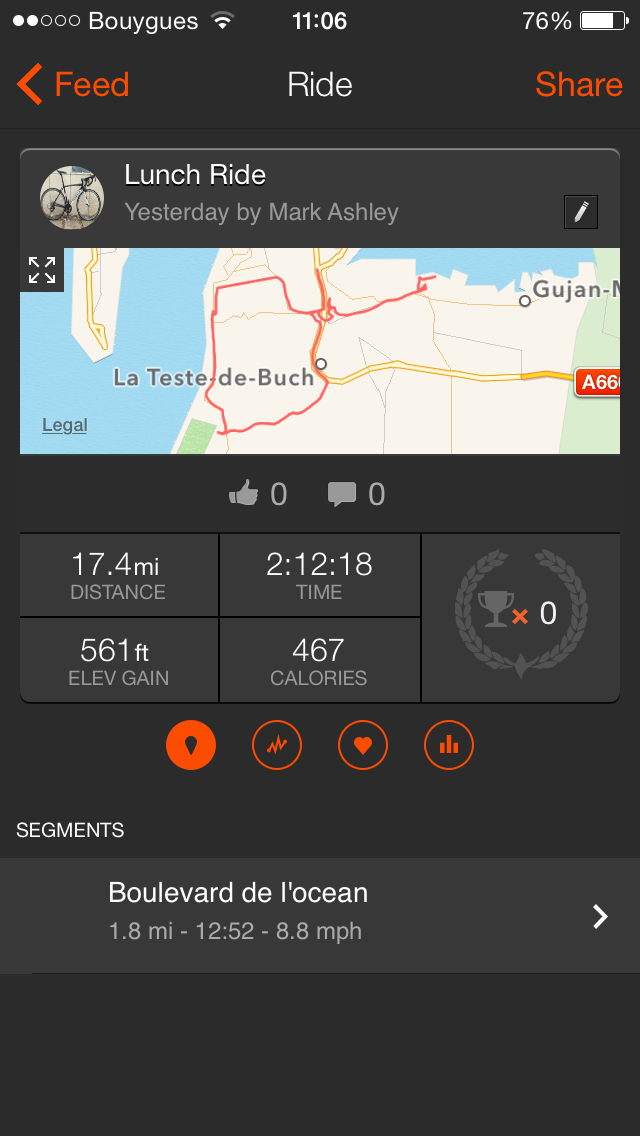 This morning we got up, left the campsite and headed to an aire in a pine forest called Biscarrose Plage, there is a crappy toilet and that’s it, no other facilities, proper camping in the woods! 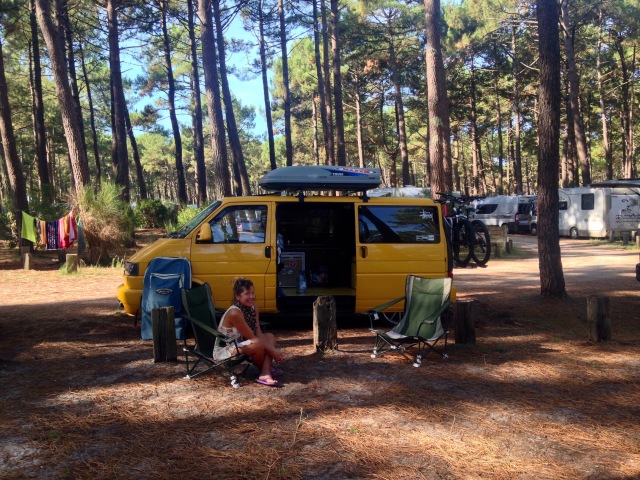 There is a beach about 2 mins from here we’re off to check out shortly, have fun at your desk or wherever you’re reading this from, we’ll be on the beach!

For anyone interested, so far we’ve covered 752 miles in 7 days, the van is running sweet and all the little upgrades and mods we’ve made for this trip have been totally worth it!