We woke reasonably early in Playa Blanca after a very windy night, as we’ve come to find they aren’t joking about the wind, if you’re by the coast it’s windy, it doesn’t let up either…

It was shortly after taking this picture we discovered there were no mugs in the van and no kettle either (first world problems) so we made some tea in a massive saucepan and shared it, we also discovered the van water tastes rank so it’s boiled bottled water for tea from now on…

The previous nights visit to the supermarket was a grab and dash affair so we concluded we should visit another supermarket and stock up on supplies to last us at least a couple of days, buy some mugs and tea towels then head on to Corralejo.

Stella had a much better time at the supermarket 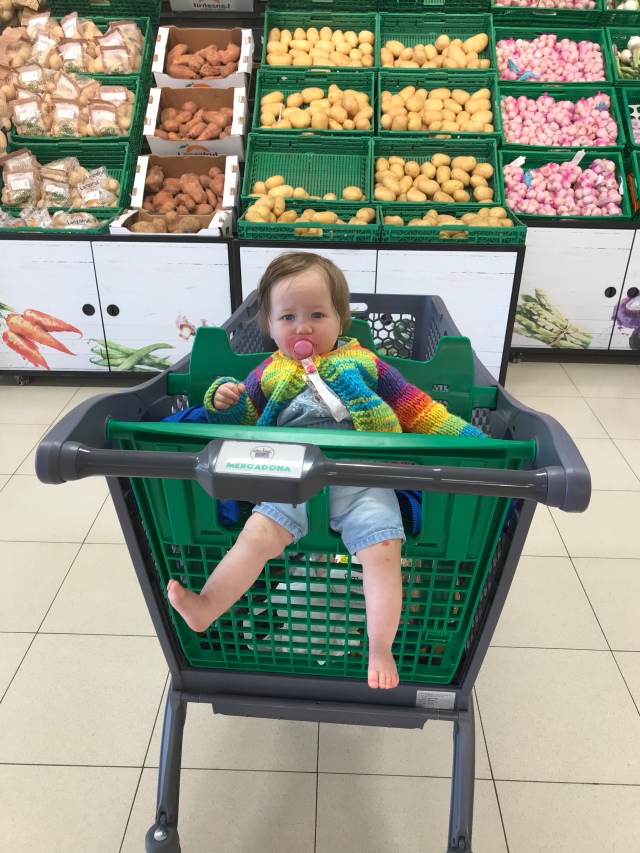 Corralejo is up near the Dunes of Corralejo national park and we had this notion that we’d be able to park up by the sea, have a bbq, watch the sun go down but that wasn’t to be, there is only roadside parking to access the dunes which probably isn’t a bad thing as this motor home would have got stuck in the sand anyway, we carried on to Corralejo which is my idea of hell, it’s like your typical Spanish tourist sea side town except it’s set back from the sea because of the wind, loads of sunburnt people sitting in English bars with their beer guts on display, sky tv everywhere and loads of shops similar to home, I spend every day in a busy city and the last place I want to be is in a busy town, there were also zero parking up options, on the way into town we saw a couple of big hotels with roads down to what we thought was the beach so we headed there looking for somewhere to stop.

The first road we turned down wasn’t a bad place to stop but we thought we’d check the road by the other hotel, tuned out to be a much better option, in no time at all we were parked up..

If you are here motorhoming and looking for an overnight stop over, this isn’t a bad option, there are 2 small supermarkets within a couple of minutes, one sells mugs and the other tea towels and BBQ’s amongst other things, the road is quiet the beach is only a few minutes walk away, it’s also inland enough not to be so windy… 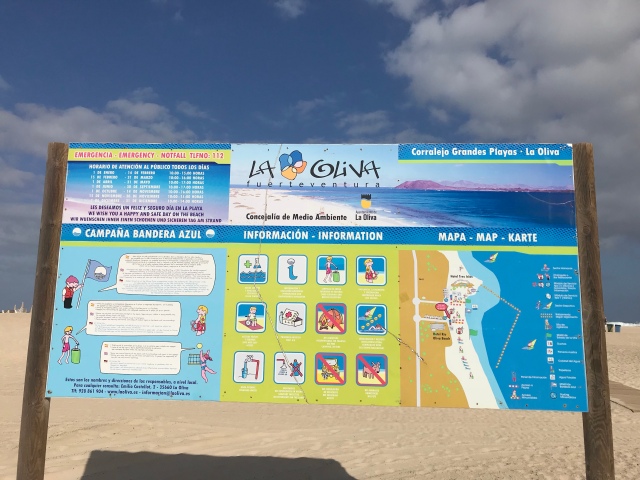 As you can see it’s quite a big beach, it’s also a very windy beach not that it bothered Stella.

We tried sheltering behind some sunloungers but were pretty much sand blasted so we headed over to a beach bar to grab some shelter and a beer, they let us buy a beer as they were closing up so after about ten minutes we had to leave, we took a walk along the beach getting blown about all the way till we found a little crater, we sat down in there for a bit and it was much less sand blastery….

We mooched back to the van to feed and bath Stella, put her to bed, then make some food and test the shower out, we also had some booze and for a short period of time I convinced Lolly to wear a colander while cooking… 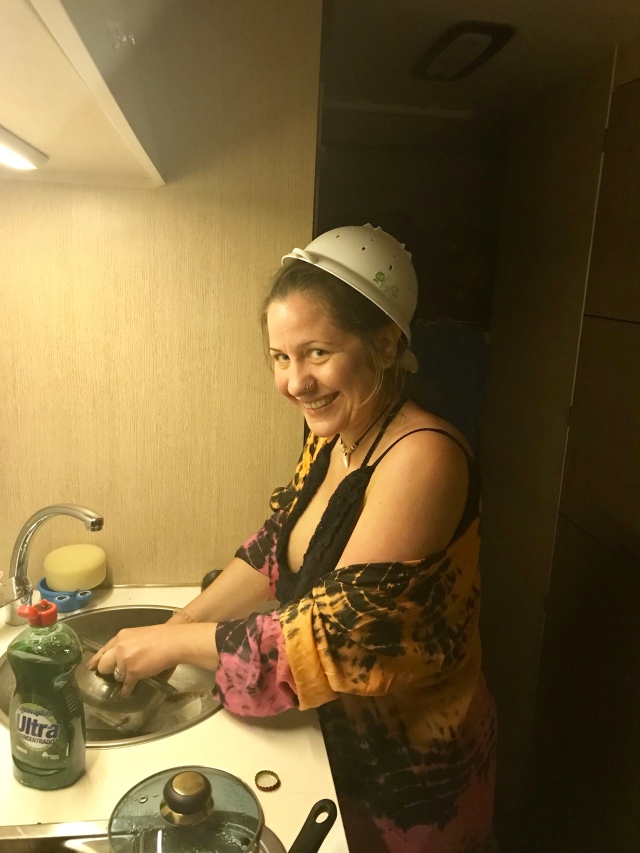 Right by where the van parked is a massive mobile phone mast that in the day looks quite ugly, however, with a lovely sunset and the mountains in the background it looks a bit like Tatooine…

Next morning we faffed about getting ready to leave and I made breakfast, it’s been the same thing for the last couple of days but it’s really nice, spicy meat crisped in the frying pan, then eggs scrambled in the oil from the meat served on some bread and butter as we don’t have a toaster with a slice of tomato on top..

Our destination for the day was Playa de Majanicho solely because the lady we hired the van from said it was nice. Before we got there however, we headed into my least favourite place to fill the van up with water which you do from petrol stations, some charge a euro for a timed amount of water, some don’t, some also have limited water which the Disa in Corralejo does so we had to abandon that and head out, not before Lolly saw a shoe shop and successfully purchased the pair of trainers I promised her for Christmas, I also had to pick up a lead for the satnav as I’d broke it, incidentally, if you are looking for a good satnav I can highly recommend the Garmin Nuvi 1390, you can pick one up from eBay for about 40 quid and it covers the whole of Europe inlcuding where we are now, do update it though as there are a few new roads over here which will through you off course as it did us trying to find the petrol station to fill up with water.

Before filling up we also had to empty, something we don’t have to do with Bumblebee, there are various locations across the island you can empty your grey water and toilet cassette, the owners of our chariot gave us map locations for each one which I will post up at the end of the blog. We found the service stop fairly easily and proceeded to empty the tanks.

It’s not an exciting business emptying dirty water and essentially a bucket of turds into a cesspit but it was made slightly more enjoyable by the squirrel army who are incredibly tame, every one of them came over to me, nibbled my hand to see if they could eat me and then retreated, the nibbling didn’t hurt and we gave them some dry weetabix and a breadstick Stella had chucked on the floor.

From here we made our way to the garage to fill up on water and this is when we discovered I should have updated the satnav, we missed the new turning to our destination and ended up on a 30 minute detour, It was approaching 15.00 and we’d spent the whole day in the motorhome, this isn’t what we’d come away for. We found the garage and spent about an hour there filling up, letting Stella play outside and stocking up on beer, this is the garage, it’s in La Oliva and charges 1 euro for a good amount of fresh water. 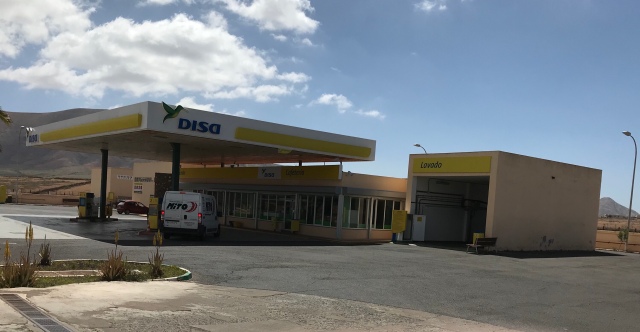 Finally we were off and on our way to our last stop, it’s was a long and empty road…

We arrived in Majanicho to discover it’s a tiny collection of shacks frequented mainly we suspect by surfers and kite surfers, to date this is the windiest place we have been, it’s very pretty but also very very windy to the point that is’t bloody freezing outside.

This was not to be our final stop, we concluded it was not the best place for an overnight so decided to head inland up into the mountains where there is much less wind, we did take Stella to the beach before we left and I took a pano of the beach. 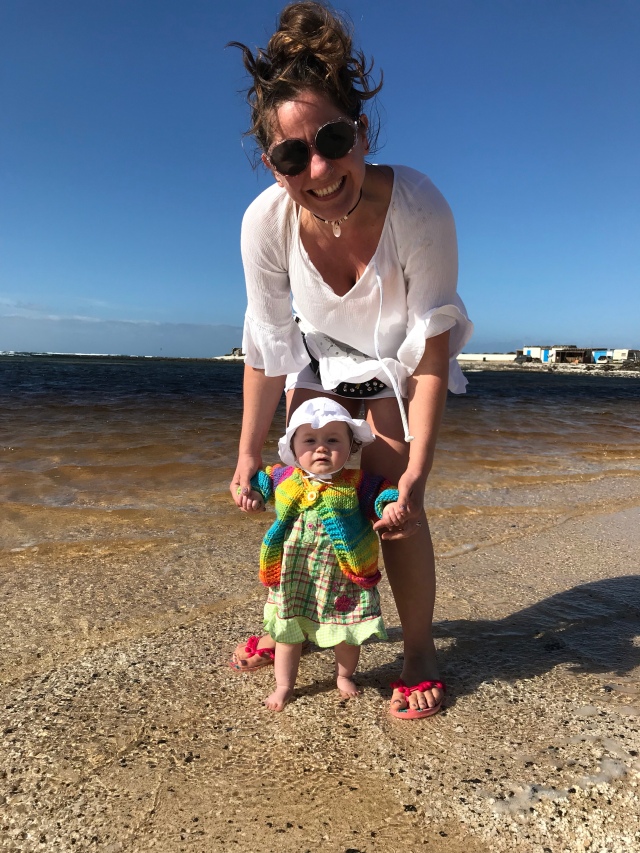 As you can see the beach was very quiet, everyone had been blown away.

Our stop for the night was to be a car park at the foot of a track that leads to a lookout, it’s a quiet road and car park with a stunning view of the island, particularly a sacred mountain called Tindaya. 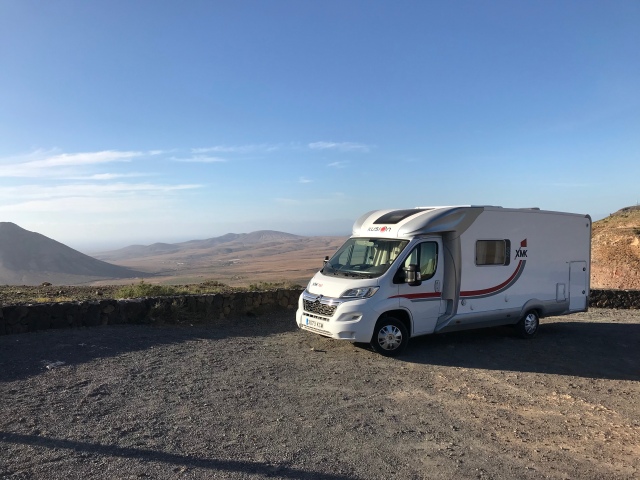 I tired to film a time lapse sunset but the go pro blew over half way through, I was also intending to take some Astro photos but ended up drinking loads of beer and eating a lovely fish pasta Lolly made us, we settled down for the night in a not to wind blasted van..

Next morning we woke up to sunshine and a herd of wild goats, I didn’t sleep that well as it was cold and I didn’t put the heating on, it wasn’t that cold when we went to bed.

We took Stella up to the view point, the view is much like the one we have from the van only slightly higher.

You can just see the van in the distance…

We’re now back in the van ready to eat some breakfast and head off somewhere else, most likely El Costillo….